Along with Banana Bread, I went through a phase where I tried many Banana Pancakes of the healthy variety. These were my favourite. I make them often because they are gluten free and nut free. The ingredients are few and the recipe from the The Green Kitchen Cookbook is simple and can be found easily on the internet or you can see it below. I’m keeping this post simple because everything about this dish is quick and easy. Best of all they are delicious!

1. Mash the bananas with a fork.
2. Place in a medium sized bowl and whisk together with the eggs and coconut.
3. Add the blueberries and stir well.
4. Heat the coconut oil in a non stick frying pan over medium heat.
5. Add 2-3 tablespoons of batter for each pancake.
6. Use a spatula to carefully flip the pancakes when they have set and the bottom is golden (roughly 2 minutes).
7. Serve with extra blueberries, maple syrup, yogurt and an extra sprinkle of coconut.

After I came across a recipe for Kiflice, I joined Fresh From the Oven.
A monthly baking group.

I was ready and excited to learn! You see, I love bread recipes but avoid them. Like the plague. Not sure why!
Habit?
Fear?
Yeast?
A habitual fear of yeast?!
Dunno…
Nevertheless, it was a habit and a fear I was prepared to face and work through!
Cos I love bread!
(Unlike my crazy fear of snakes that I have decided does not need to be addressed. Ever.)

The challenge was Khrushchev Rolls by Mushitza (click to see recipe).

I made the dough very late one night after another hectic, school holiday day at the beach with all the kids and their friends… (and that’s just half of them, the other half were riding the waterslides around the corner!)

After our 8 hour day at the beach we were exhausted.
However, I was determined to participate in this month’s challenge and psyched myself up to bake!
I began… and within minutes it was over!
The dough was made and resting in the fridge overnight!

I was thrilled with how easy it was and convinced myself I must have messed it up and surely missed something in my bleary eyed enthusiasm!

The next day I wasn’t expecting much.

My first batch I rolled around a thin beef sausage.

We ate these for lunch.
I put all the sauces out for the kids, who were happy to eat the ‘sausage rolls’.
I found that the sauce detracted from the wonderful taste of the bread!
The dough smelled amazing while baking and it tasted too good to hide under any sauce flavouring.

For the rest of the dough, I followed the cutting and rolling style of the Kiflice.

I filled half with crumbed goat’s feta…

And the rest with Nutella…

I rolled them up. Baked them…

And for such little effort what an amazing result.
I can’t recommend the flavour of the pastry enough.
The smell and taste was so good, the kids actually fought over them (especially the Nutella ones). 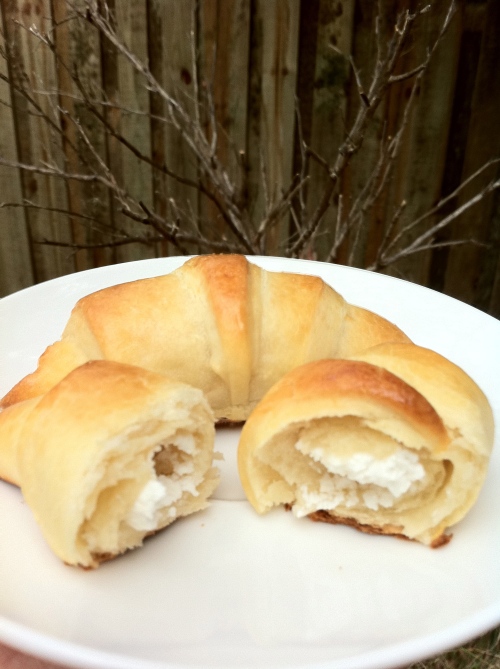 The following day we had a futsal gala day and my only regret was not making enough of these to feed the team.

And the younger sibling (supporters) that get dragged around to watch their older brothers!

With school around the corner, I will definitely be making batches of these rolls to put in lunch boxes and have ready for after school snacks.