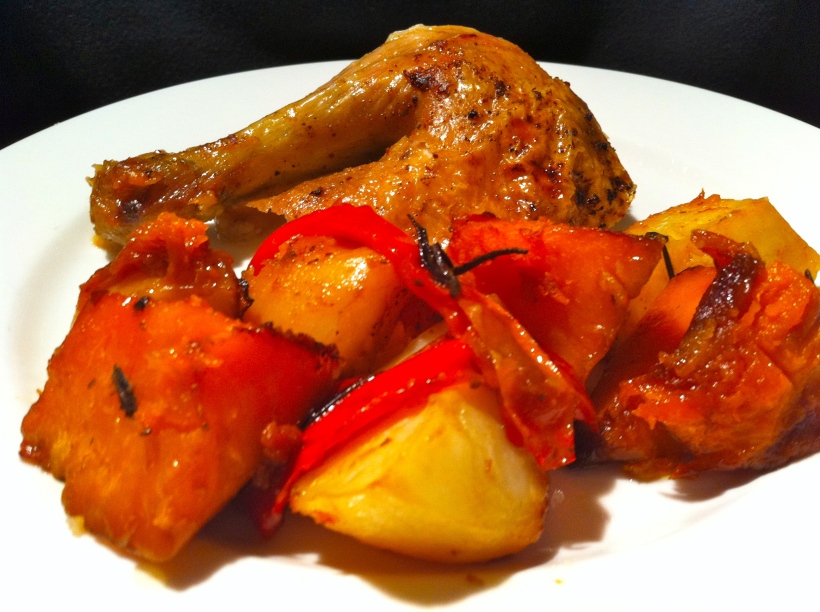 This week’s French Fridays with Dorie recipe was Cinnamon-Crunch Chicken.

I seemed to fixate on the word “crunch”.
It sent me down a weird and wonderful path of word association.
Crunchy, crispy, golden, succulent, seasoned, roasted chicken.
I couldn’t get this image out of mind.

I craved it.
I wanted it.
I could taste it!

Speculoos became my scape goat.
I had no idea what they were.
Or LU Cinnamon Sugar Spice Biscuits or LU Bastogne.

How was I supposed to find them when I didn’t even know what they looked like?!
My argument felt incredibly persuasive.

It was decided!
I would find another chicken recipe from Dorie that would satisfy my cravings.
I was scanning for the word roasted…
Then I saw it…
Roast Chicken for Les Paresseux.
I read the first line in Dorie’s introduction of the recipe, “les paresseux are lazy people, and this is a recipe for them”.
Alright!
I was on a winner!

Some weeks I want to get lost in the complexity of a recipe.
That’s what lead me to make Movida’s Chorizo Bomba and the Sweet and Salty Layer Cake from Baked.

But the last few week’s I’ve spent the little free time I’ve had, sewing costumes for my 11 year old’s school concert.
I need to make it clear here, I don’t usually sew and my contribution was small compared to what other’s were doing.
But I found myself spending any free time I had doing this.

The kids had a great time while we sewed..

But it was really starting to wear me out!

So all I wanted was to make something easy, familiar and comforting!
And this recipe hit the spot.

I seasoned the chicken inside and out. (Dorie suggests salt and pepper however I used Vegeta, it’s a vegetable stock powder that Yugoslav’s seem to love and use in everything! So throwing in a bit of my own tradition in this recipe, I rubbed it all over the bird!)
I then shoved a head of garlic cut in half, a sprig of rosemary, thyme and oregano inside the cavity.
Placed the chicken on top of a couple slices of bread that I placed in the middle of the oiled roasting dish.
Around the chicken I threw the other half of the garlic head, another sprig of rosemary, thyme and oregano and a few lugs of oil along with 2/3 cup of water.

Dorie suggests you add potatoes, carrots and shallots at the end of this time.
I went with our favourite mix of potatoes, pumpkin, red capsicums and spanish onions.

Another 45 minutes and it was done!

And oh my goodness, it was so tasty!

It was exactly what I had envisaged and what I was craving!
It was also incredibly easy to make and I even got to start reading my latest neuropsych book with the free time I had!

The French Fridays with Dorie group made Roast Chicken for Les Paresseux before I joined the group, so I was glad to catch up on a recipe I had missed! A recipe I will definitely make again and again!

And I can’t wait to check out what the group thought of the Cinnamon-Crunch Chicken!