In 1979 we left Yugoslavia and boarded a Qantas flight to begin our new life in Sydney, Australia.
My mum’s sister greeted us at the airport, she had immigrated many years earlier and we stayed with her family for a couple of months until we got on our feet.
I was 7 years old and I have two very distinct memories of this time.
1. I remember wondering how people could eat Kentucky Fried Chicken with Coleslaw! I thought it was the strangest and most unpleasant tasting thing I had ever tried (strangely enough, it didn’t take long to develop a taste for this food phenomenon!)
2. My 10 & 6 year old cousins had a small tv in the play room at the back of the house where they would go and watch Dr Who episodes every night after dinner. This is the Dr I was introduced to…

The Fourth Dr Who

I have to tell you, we were terrified watching some of the episodes! I remember many times hiding under sheets while we waited for the scary bits to be over! But as soon as the show was finished our bravado returned. I remember wrapping my younger cousin from head to food in toilet paper trying to re-create one of the show’s creatures!

I’m not sure where Dr Who and I parted ways? I’d like to say it was the long hours spent studying as I got older and had less and less time for tv. This is true (seriously!) But if I’m to be totally honest, I have to acknowledge that along with this was an ever growing interest in boys and spending any free time I did have, going out with friends.

However,  in the last few months the Dr entered my life again, thanks to my now 12 year old son and his friends!
I listened to their in depth conversations about the latest episodes as they dissected each event and argued about their absolute favourite episode!

We had some sleepless nights when they discovered the weeping angels and thought it was funny to replay the scary bits of the episode again and again on You Tube! It was okay doing that when they were all together at someone’s house and in a big group, but they soon learnt it wasn’t that great when they had to come home and get ready for bed! At night! By themselves. All alone in their room!
Thankfully the more they watched the scary bits on You Tube, the more immune they became! 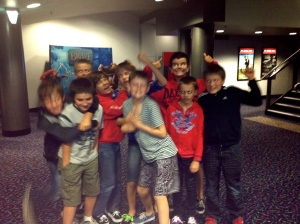 (Can you believe every photo I have of my son’t 12th birthday is blurry! How to make them stand still long enough to take a decent photo is beyond me!)

So with his 12th Birthday approaching I told the boys I would make a Tardis birthday cake!
To be honest I was all talk.
But they told everyone and got so excited I realised at some point my credibility was at stake!
Once I stopped fighting the idea, I relaxed and had a lot of fun.

I decided I would take this opportunity to incorporate a number of recipes I’ve been wanting to try for a long time and to be honest, without accountability and a looming deadline they would probably have been on my “one day” list for years to come.

I’ve been wanting to try Marshmallow Fondant.
I LOVE LOVE LOVE MARSHMALLOWS!
I found a recipe one of the prettiest blogs I have ever come across! Bakingdom .
If you click here it will take you straight to Darla’s marshmallow fondant recipe!

Now I’ve never made, let alone used marshmallow fondant before. So I was pretty happy with the results…

My other “one day” recipe was from a blog I stumbled upon recently that is indescribably stunning Sweetapolita.

I saw Rosie’s Rainbow Doodle Birthday Cake and it’s been on my mind ever since.
So I decided, since I was expected to produce a Tardis birthday cake, I was going to go all the way! 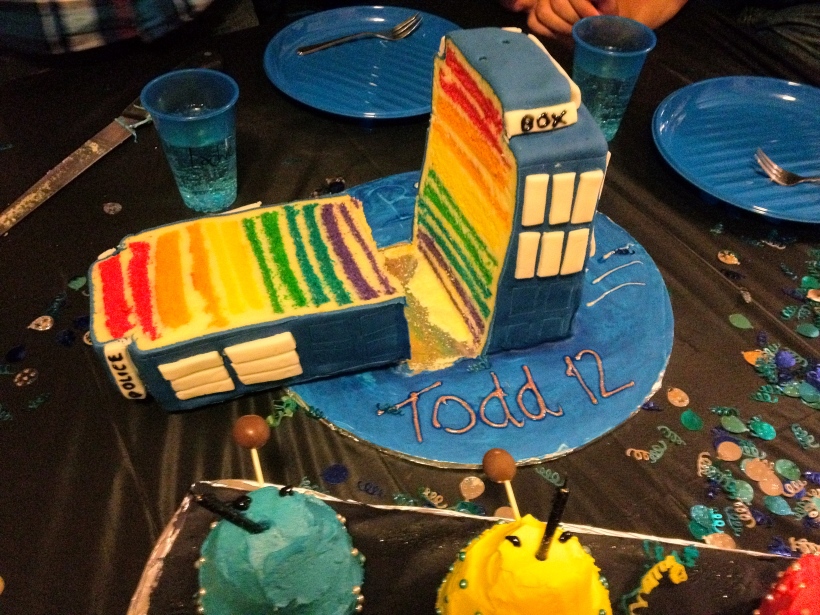 To say the boys were blown away would be an understatement!

I followed Rosie’s recipe for the Rainbow Cake with Lemony Swiss Meringue Buttercream and made as many layers as I thought a Tardis would need in height. I spread her lemony swiss meringue buttercream between each layer and finished it off with a crumb coat before covering the whole thing with the coloured Marshmallow Fondant.

The dalek cupcakes were simply chocolate cupcakes.
I made a dozen regular sized cupcakes and topped them each with mini cupcake.
I then made and tinted buttercream in the colours of the newest dalek models and covered the cupcakes.
From what I can gather, the different coloured daleks have different qualities, so the boys put quite a bit of thought into which dalek they wanted to eat!

Then back to their skateboards… on their stomachs…as you do…
I guess riding upright got boring?!?

There was an error retrieving images from Instagram. An attempt will be remade in a few minutes.